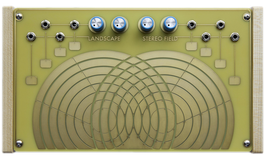 STEREO FIELD is one instrument with three uses. It is simultaneously a stereo/quad modular touch plate feedback atonal synthesizer, a stereo/quad audio processor and a pressure sensitive chaotic CV "controller". Checkout this video!

All three uses are available separately as well as simultaneously and in conversation with each other. The Stereo Field allows its user to manipulate and patch two analog stereo preamp circuits via touch plates. By utilizing skin conductivity as new paths for current to follow you are creating "new circuits" and new sounds in relation to where your fingers are patching. The individual touch plates are directly connected to nearly every connection point of every component in its circuitry (located directly under each corresponding touch plate). When touched with multiple fingers it will create atonal analog feedback with either of the two mirrored circuits represented by interlocking touch-plate circles. The resulting feedback can go beyond the abilities of human hearing (Take caution!) and down to the very slow clicks of a saw waveform and both can often be happening simultaneously. These parallel mirrored circuits can be finger patched separately or together yielding vastly different chaotic results in regards to texture, timbre and stereo imaging. This instrument has the ability to create atonal synth tones in stereo (and quad) as well as process incoming stereo audio (and quad) sources via 1/4" and 3.5mm ins and outs. Incoming audio sources can be "patched" or rewoven into any area of either or both of the circuits via skin contact. The two stereo input volume knobs (center) shape and effect distortion, drive amounts, internal feedback pitch, and modulation rates depending on how your fingers are patching. The quad inputs and outputs via the 3.5mm jacks have small touch plates leading to and from allowing for touch access of each of the 4 inputs and 4 outputs. If multiple audio signals are traveling into the Stereo Field these audio sources can be intermingled and can modulate one another, again depending upon where your fingers are patching. Sending CV signals into the 3.5mm input jacks will open up many more possibilities both in terms of synthesized sounds and audio processing. Since the two stereo circuits are mirror images of one another the 3.5mm ins and outs can also be thought of as (L/R,R/L) and when your hands get involved this imaging will be further confused and jumbled as your skin can intermingle all of these paths. The Stereo Field can also be used as a controlled chaos source when using the 3.5mm outputs to send the feedback your hands create as CV to your modular system. Due to the nature of feedback and finger patching the 4 available CV signals have the ability to get incredibly complex, organic and textured in nature (see audio examples below in use with a euro-rack system). Because of the open nature of Stereo Field it can both send and receive CV modulation simultaneously. In addition, this can all be happening while your finger patching is changing and altering the incoming and outgoing CV while also processing incoming audio. These ins and outs can also be patched together with cables for sustained tones with the pitch/rhythm/volume/"cutoff" being affected by adjusting the incoming and outgoing volume knobs in various settings. Inter-patching in this way will also allow for sustained pulse beats and filter-esk sound shaping in addition to bringing new results to finger patching via the touch plates. Most importantly, processed audio and synthesized audio are available simultaneously with the ability to influence and modulate each other. This will often blur the lines between the two; who is manipulating who? who comes out on top as audio and who is modulation? This can be a constantly evolving cycle based upon where the performers fingers are placed and highly sensitive skin contact pressure changes.

The sound is sometimes easy to describe; (distortion, filtering, resonance, high-pass, lo-pass, feedback, sine waves, square waves, pulse width modulation, formants, white noise, pink noise, metallic noise, stereo rhythms, wave-folding, frequency modulation, amplitude modulation, spacial shifts, panning, sub octaves, pitch following) but most of the time these definitions fall "between effects" or in combinations of multiple effects that can be shifting, feeding back or pulsing in sync with incoming audio during processing. Since the user is directly touching analog circuitry through gold touch plates, shifts in pitch/timbre/stereo/drive/modulation can be accessed instantly. The stereo (or quad) imaging of the instrument is both influenced by feedback and modulation in regards to where your fingertips are patching along with modulation caused by incoming audio content. In addition to the sheer number of patching and finger pressure combinations available, the instrument has shown theremin-esk properties in certain settings due to the large surface area of the gold plates. To bring this even a step further the synth/modulation/processing tones can be triggered by only breathing on the plates using the moisture content of breath to partially control and sculpt the audio.

• Quad 3.5mm inputs (2x L/R mirrored pairs corresponding to each of the two circuits, can be used for CV, audio or both)

• Quad 3.5mm outputs (2x L/R mirrored pairs corresponding to each of the two circuits, can be used for CV, audio or both)

• As a CV "Controller" it will output approx. 4.2v to -2.8v depending on hand placement and input/output vol. settings.

• 8 x touch plates corresponding to each of the 8 x 3.5mm jacks for touch interaction with i/o cable patch points

The Landscape Soundwich isi available as a DIY project. You'll find it over here. 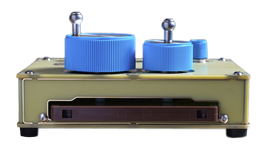 The HC-TT (Human Controlled Tape Transport) is a compact cassette manipulation device which allows you to manually play a cassette with your hands. The resulting sound can be incredibly similar to scratching a vinyl record. Sound will only be produced while your hands are turning either of the large playback knobs. By turning these knobs you are directly rotating the cassette spindles which moves the tape across the internal tape head. The knobs “play” a regular cassette forwards and backwards. There is no motor in this device, so direction and speed is left to the performer. The illuminated touch switch is a momentary mute for both the mono audio output as well as the CV/Gate outputs. The Arches and Moons touch plates allow for feedback and other strange interactions. This device does not record audio but only outputs pre-recorded audio from any cassette tape. Please see below for additional details. Check this video or that.

• Forwards and Backwards knobs w/metal cranks utilize 4 ball bearings soldered into the case allowing for responsive control and manipulation of an audio cassette tape. Scrubbing of audio tape using the two knobs can sounds nearly identical to scratching a vinyl record at times. There is no motor or automatic playback in this device, you are the motor. [Large Arrow] knob is forwards and [Small Arrow] knob is backwards.

• Momentary Touch Mute [Sunset] for gating audio (tape or external) and/or CV/Gate outputs. Touching the mute switch and Feedback Points simultaneously will create strange buzzy tonalities which change based on how much skin is in contact with each touch point.

• A Gain control at it's highest level can get quite loud and add a bit if overdrive to the signal, plus when used in combination with the tone control it can pushed a little more. At it's lowest level it still allows cleaner audio and lower CV out when moving the tape. This is also pre-CV/Gate which means it will be used in tandem with the tone control to send the desired CV/Gate amounts out of the HC-TT.

• A lo-fi dirty Tone control which cuts most bass content at it's lowest level and boosts bass content at it's highest. This control is pre-CV/Gate which means it will allow you to adjust your CV/Gate levels and response. You will hear scrubbing sounds when turning this knob and the audio will also cutout due to it’s placement in the feedback path of the circuit. Turning the knob very quickly creates a bass drum like effect and if you do this while holding the touch mute the tone will change. This can also be used to send out a Gate signal or to “mute” audio destructively by quickly turning the knob.

• 3.5mm CV and Gate [Half Moon and Square] outputs which allow you to use your chosen tape's audio content in combination with your playing style as a way to manipulate a modular synthesizer. To put it another way, the HC-TT is also a tape based "controller" or modulation source. Utilize the immediate responsiveness of a mechanical device and analog tape to control your system in chaotic or subtle ways. Hand crank a sequencer using the gate output, "scratch" a VCO with the CV output or make your system sound somewhat similar to the warbled tape you are currently manipulating.

• I/O Feedback Touch Points [Arches and Moons] allowing for touch sensitive analog feedback within the preamp (not to tape). The feedback you create through your skin also outputs to CV/Gate. This feedback can greatly distort and mangle your manipulated tape sound as well as incoming audio. By touching only the input pad [Arches] you will turn your body into an antenna injecting radio signals, hum or static to the audio and CV/Gate outputs (radio frequencies and results vary greatly by location). While touching the input pad [Arches] you can also use your other hand as a lo-fi “circuit sniffer” to listen to the sounds of laptops, cellphones and other equipment which output EMF. While touching both pads [Arches + Moons] and also introducing slight contact towards the sides of the touch mute switch you can change the character of the feedback to sound more liquid. By touching all three directly you will hear bee or mosquito like tonalities which will change depending on the amounts of skin in contact with each of the touch pads.

• The cassette inserts along the front edge by lifting both knobs and then reseating them through the cassette spindles and into the ball bearings below. The cassette is not damaged by this playback method and this technique makes it nearly impossible to tangle a tape.

• 1/4” mono input [Down Arrow/right side] which allows you to use the HC-TT’s circuitry as a lo-fi overdrive and playable touch feedback processing device. The input does not go to tape but does go through the tone control and drive amount. The input is also processed to the CV/Gate outs. The touch mute will also mute incoming audio.

• The included 12v power supply works in all countries and is provided with both a country specific and US plug type adaptor.

• The tape head can easily be reached and cleaned with a cotton swab.

NOTE: The HC-TT drives tapes forwards and reverse utilizing the spindles which means store bought loops or loose diy tape loops will not work in this device. Tape loops are normally driven by the Capstan which pulls the tape along.

Based in Leipzig, Germany

Shipping to Germany & EU, no USA