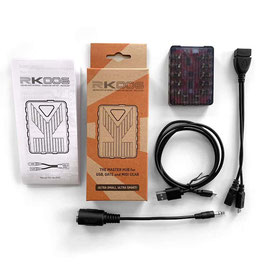 What do you call a super portable MIDI interface which also is a standalone interconnecting USB host, can drive gate signals, has per-port MIDI Filtering /Clock Processing can Polychain devices and is about the size of an Altoids tin?? Some call it a ‘gamechanger’… we call it the RK-006!  Check the full manual and support page here.

The RK-006 is about 7x5x1cm in size (3x2x0.4″) and packs 2 MIDI Inputs and 10 MIDI outputs. Outputs can change their function to MIDI/Gate or PWM, offerering formidable connecting possibilities from any MIDI device! Here we offer the Cable Bundle version, which includes 4 extra 1.5m TRS-A to DIN5 male cables + 1 TRSAxB Dongle.

So let’s elaborate on the RK-006 specifics and it’s special features which differentiate it from the rest:

You can use the RK-006 completely standalone with the same ease of using a 2-in, 10-out thru hub (with usb-standalone hosting and port filtering benefits), or you can use it as a 2-in, 10-out USB MIDI interface on your favourite platform/DAW (PC / MAC / Linux / Android / iOS (on iOS you need the apple usb connection cable) Just use one of the ten presets or configure and store your own custom configurations in the RK-006 via our webMIDI-settings-interface.

Every output port on the RK-006 can be individually set to send out full MIDI or Gate pulses, making a lovely hybrid use of it’s 3.5mm TRS connectors: You can connect DIN5 MIDI Gear via the included TRS-A to DIN5 cables or just plug in a plain ‘stereo minijack audio cable’ (preferably shielded) to sync up modular gear or even ‘minijack-MIDI’ devices like the Korg Electribe or NTS-1 and such.

In MIDI mode you can apply MIDI Channel/Clock filtering and even clock modifiers (‘Multiclock’, allowing creative use of an abundance of sequencer gear which are available nowadays. Cou can even chain multiple MIDI devices together. Of course the RK-006 can also power our advanced RK-002 Smart MIDI processing cable as well so you can use it as a MIDI FX chain.

When you set a port to Gate mode the MIDI-Tempo-to-Gate multiclock is still available. This together with an assignable Run/Stop signal allows synchronisation of devices like older Sync24/DINSync units as the TR-808, TR-303 and TR-606 (just to name a few) but also newer ones like the Moog DFAM and Teenage Pocket Operators and anything inbetween; Directly from your MIDI device.

Gate signals can be triggered via a MIDI clock signal but also via MIDI Notes, adding the ability to bridge MIDI controller pads and modular gear.

The one-button on the RK-006 can be used to tap in a master clock or change presets on the RK-006 routing. You can also use it to switch from seemingly a MIDI merger/thru box to e.g. an independent dual-brain setup or one-big-master-gate-clocks-generator.

By using a simple (and included) OTG Adapter cable you can even connect plain 5V power and a USB hub to the RK-006 and host multiple USB-MIDI devices. The RK-006 will interconnect them and merge them together with the existing hardware ports. And because one USB-cable can route a whole lot more than just a MIDI-In or MIDI-Out we added extra filtering to specifically target these USB devices as well.

And while in the USB area: You can even plug in a USB Memory Stick with prepared MIDI files (also called ‘SMF’). You can export these files on a DAW like Bitwig, Fruityloops, Ableton or Reason and playback these prepared tracks on your DAWless system, ready to play or clock-slave on your standalone sequencer of choice and play along live with it.

This might already be too much info, but the story does not finish there quite yet:

All the above can take place in the DAWless area BUT… You can also connect the RK-006 to e.g. a Desktop computer or iPad (note that iOS do need Apple’s USB2Lightning cable) and enjoy all the RK-006 ports independently addressable on your DAW! This means:

* 10 separate MIDI outputs, every one of them can accommodate 16 MIDI devices

Also, for usability’s sake we added:

* Aggregate merged MIDI Out port to ALL 10 ports

You can find the accompanying manual here elaborating on the features. If you’re in an advanced mode – check out the RK-006 settings page (useable with webMIDI on chrome / edge browser) or download the iOS app. The MIDI SysEx implementation is available too, it’s hjuuudjz!.

This thing is unbelievable, check the full manual and support page here! 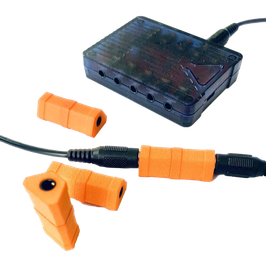 A small adapter for the RK-006 which you can use to convert the RK-006 PWM modes to a Control Voltage. See the RK-006 Manual for details. 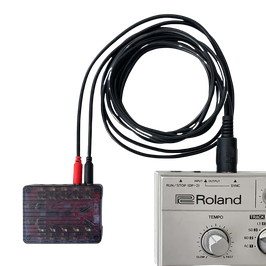 A cable which routes 2x jack ( 3.5mm, 1/8”) signals to the RUN/STOP and CLOCK port on DinSync devices (Also known as Sync24) You can feed these signals from the RK-006 or a modular system and control the sequencer of e.g. Roland gear like the TR-808, TR-606,… For non-RK006 users; Note that DINSync/Sync24 use 5V levels Reverse use also possible to breakout Sync24 to dual jack.

*this is only the cable, none of the synth gadgets on the pic!

Based in Leipzig, Germany

Shipping to Germany & EU, no USA